Zealandia Should be Designated as a Continent 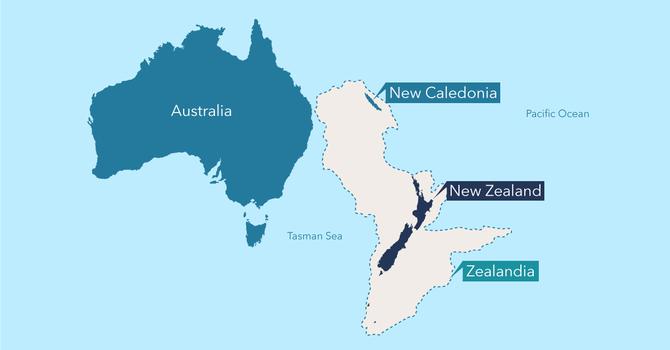 “Designated” means accepted to be true by almost all scientists around the world, and as reflected in textbooks and other official publications.

1. There is no clear definition of what makes a continent, and Zealandia is different enough from the other continents that it clearly doesn’t belong.
Warrant:

Zealandia is physically very different from other continents. These differences would make it a very odd partner with the other 7 continents.  Zealandia is 94% underwater, drastically different than the other 7 continents. Also, it is only 3/5 the size of the smallest continent, Australia, if you include the underwater portion. If you include just the above water portion, it is only 4% of Australia, our smallest continent.  4%!  If you compare the above water land portion of Zealandia with that of our largest continent, Asia, Zealandia is .6% of Asia’s size.  Not even a full 1%!  How can that make any sense to group them together? Also, only 6% of Zealandia is above water and the other continents are 80% or more above water.  Another difference is that Zealandia doesn't have its own continental plate, unlike other continents.  So what is Zealandia? Geologist Elizabeth Dowding of the University of New South Wales, says geologists do not define continents: instead, they characterize the types of crust and delineate their geological features. By this definition, Zealandia is not a continent. Indeed, it is 94% continental margin with an extended shelf.” Richard Ernst, a geologist at Carleton University in Ottawa, agrees that Zealandia is not a continent and proposes coining a new term — mini-continent— for Zealandia. He thinks this is perfect given that it is too large to be called a microcontinent and too small to be classified as a full-sized continent. Indeed, even the geologists from New Zealand who are lobbying to call Zealandia a continent acknowledge the sticky issue of Zealandia’s puny size compared to the other continents.  They know Zealandia is too small, so they also want to impose a minimum size limitation of a million square kilometers on any future continents. Of course, they want this measurement to include underwater land as well, since Zealandia is 94% underwater. They want this arbitrary land size minimum because Zealandia would just make the cut but this would prevent other land masses that also could be called continents from getting the designation.  How ridiculous and self-serving to close the door on other qualified land masses, such as Greenland, who also meet the same requirements as Zealandia, and which actually have more above water land mass like other continents.  This is clearly self-serving and arbitrary, with no scientific logic.

It may be easier to just throw Zealandia into an already existing category and slap on the continent or micro-continent label, but in fact, if we care about scientific accuracy, it is neither of these.  It is a mini-continent, between a micro continent and a full continent. Intuitively, judge, given how different Zealandia is from our established continents, we know this makes more sense.

2. Land masses such as Greenland and surrounding areas also share the same characteristics of Zealandia, so if we accept Zealandia as a continent, they would have to be designated as continents too.
Warrant:

Greenland and surrounding areas has long been thought about as a continent, yet scientists have not made it one. Not only does it fall under the criteria for a continent, but it also has a much larger above water land area than Zealandia. And if the geological argument has to be considered impartially then an island like Madagascar should also get a status of a continent, and Europe and Asia would become the same continent, called Eurasia. In addition, CNN has just reported this month that deep at the bottom of the Indian Ocean, a research team, led by South Africa's University of the Witwatersrand, has found pieces of a continent dubbed 'Mauritia,' located under the popular island of Mauritius. The more we study submerged land mass with satellite imagery, the more likely we will find many other landmasses to call continents.

Judge, if we accept Zealandia as a continent, many other new continents will follow, causing scientific and political disruption and confusion. These destabilizing events could cause tensions between various countries that could potentially lead to conflicts and wars over landmass, drilling rights, mining rights, etc.

3. Since there is no agreed upon scientific definition of continent, convention and tradition need to be acknowledged.
Warrant:

There are other factors that have determined what we call continents, and even that is disputed today in different countries.  We have never had a universally accepted designation of continents, and it hasn’t made any difference in world politics or economics or security. In the U.S., by convention, there are seven continents: Asia, Africa, North America, South America, Europe, Australia, and Antarctica. In other parts of the world, some geographers list only six continents, combining Europe and Asia into Eurasia. In parts of the world, students learn that there are just five continents: Eurasia, Australia, Africa, Antarctica, and the Americas, combining North and South America into one because if it wasn’t for the Panama Canal, a manmade structure, then North and South America would be one contiguous land mass. To some geographers, however, "continent" is not just a physical term; it also carries cultural connotations. For example, Europe and Asia are physically part of the same landmass, but the two areas are culturally diverse. (That is, the various cultural groups in Asia have more in common with one another than with those of Europe.) Islands located near a continent are generally considered, in a geographical sense, part of that continent. Greenland, for example, is politically part of Europe but belongs geographically to North America, as do the islands of the Caribbean and the western North Atlantic Ocean. There are some islands and island groups, however, that are not considered part of any continent, geographically speaking. Traditionally, New Zealand, Hawaii, and French Polynesia are among them. Oceania is the collective name for the lands of the Pacific Ocean, including Melanesia, Micronesia, and Polynesia. Oceania is a convenient way to name these areas, which, with the exception of Australia, are not part of any continent. But Oceania itself is not a continent.

Judge, this hodgepodge of definitions is what has been in existence for hundreds of years with no meaningful consequences. A single study and the opinions of a few geologists should not be enough to change the way people think about continents.