The United States Should Establish a Living Wage for Its Workers 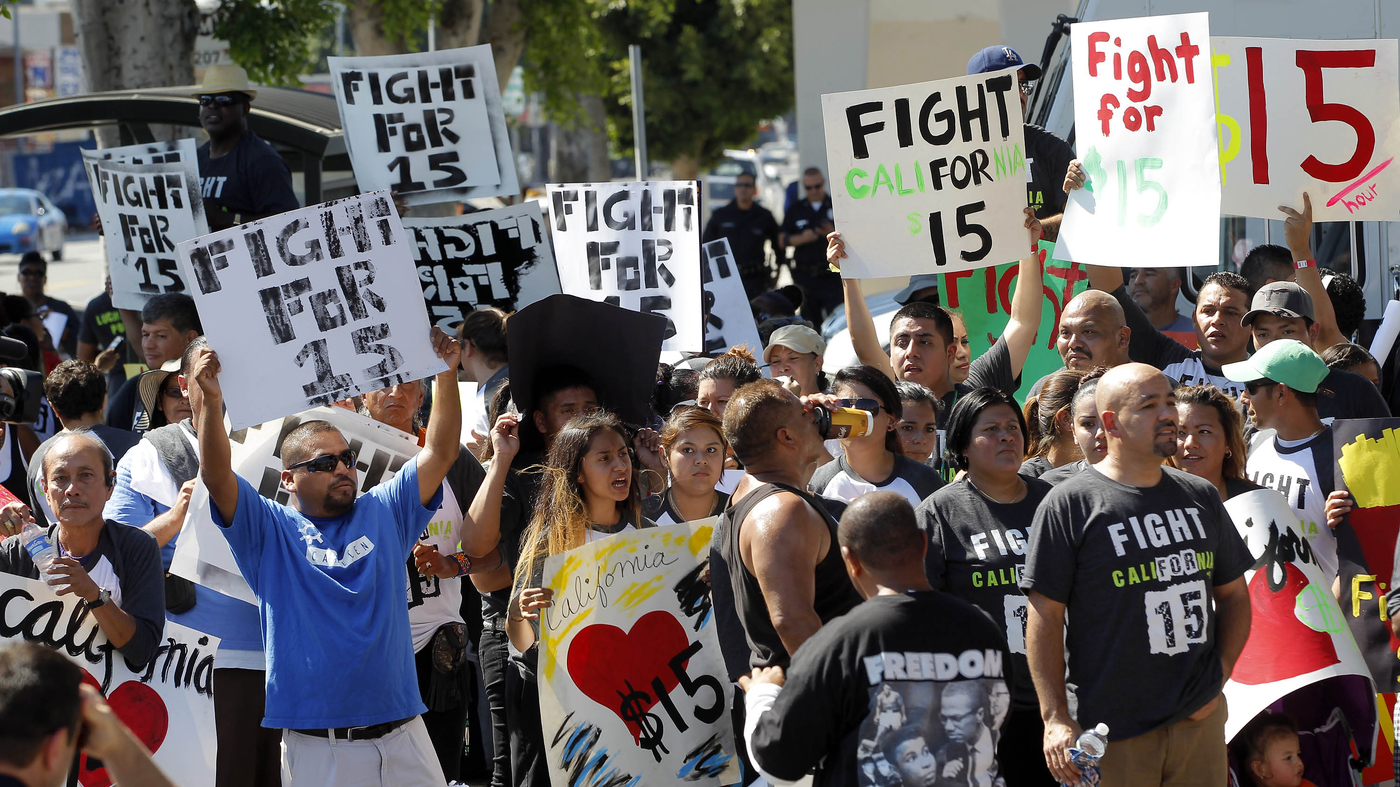 1) The Economic Policy Institute found that recent increases in minimum wage have reduced the effects of the recession.

2) New data shows that 46.2 million people in the U.S. lived below the poverty line — about $23,000 for a family of four per year, a historically high number. This number affects 16 MILLION  children, judge. 16 million innocent children. Clearly, we need an effective way to reduce poverty in the United States and help all of these families get back on their feet. And living wage will do just that.

Living wage: minimum income necessary for a worker to meet basic needs, based on family income and size. -Living wage=increase in minimum wage

1. The earnings of minimum wage workers are crucial to their families' well-being.
Warrant:

To get the economy back on track, spending power has to be in the hands of those who actually spend in the real economy. That means regular people, not the super-wealthy who tend to hoard wealth or invest in financial products. The minimum wage story is not just a story about income inequality, but rather it’s about an elite that has hijacked the economic system and made it work less productively than before while redistributing more of what is working to themselves.

Minimum wage increases put money in the pockets of low-wage workers who have little choice but to spend that money immediately in their local communities. Research has shown that raising the minimum wage boosts consumer spending, increasing the demand that drives economic growth.

When the federal minimum wage was first enacted in 1938 at the height of the Great Depression, its twin goals were maintaining a wage floor to keep workers out of poverty, and stimulating the consumer spending necessary for economic recovery.  President Franklin Roosevelt called for its enactment as “an essential part of economic recovery,” explaining that by increasing the purchasing power of those workers “who have the least of it today, the purchasing power of the Nation as a whole – can be still further increased, (and) other happy results will flow from such an increase.”

A study done by Mark Brenner in 2005 of the Boston living wage found little evidence of job losses, if any at all. Contractors who were forced to raise wages because of the law saw increased employment and job growth.Affected firms added 42.1 full-time positions, while unaffected firms added 22.4. Also, the number of contract employees covered by the Boston ordinance increased more at firms that were forced to raise wages than those who did not have to. Brenner concluded that while approximately 1,000 workers received wage gains, there was no evidence of reduced employment or hours, rather the employment increased. This is sourced from the Political Economy Research Institute article, “The Economic Impact of Living Wage Ordinances.”

A study done by Candace Howes in San Francisco also does not support claims of job loss. Over the four years of her study from 1997-2002, the number of home-care workers actually INCREASED by 54% after the living wage was implemented. This is sourced from New York Times article, “Study Finds Living Wage to Increase Employment.”

A person making a living wage is not using as many public services as someone on unemployment, according to economics expert Professor Brock Haussamen. An unemployed worker is given welfare, rent assistance and food stamps in many states. With living wage, the need for public assistance is lowered and this reduces the tax burden on the community and the state. Judge, if, with living wage, people have jobs, they are not on welfare. The less people on welfare, the less taxes for everybody. Welfare benefits are funded by taxes on the people. The more people going out there and working, even for minimum wage jobs, the less taxes it means for everyone else. And if more people have jobs, they are paying taxes, and even MORE people can benefit from welfare. This is sourced from the Wall Street Journal.

1) “By establishing a living wage, we only hurt our economy. Trust me, losing jobs and money is not a good thing.” stated Gertrude Nasar, a professor of business at Columbia University.

2) Gov. Schwarzenegger proposed 15 percent increase in the state minimum wage would destroy about 35,000 to 70,000 unskilled jobs - putting 1.5 to 3 percent of young people out of work.Overall, the increase in California would eliminate about 70,000 to 140,000 jobs. A 15 percent increase in the minimum wage nationwide would destroy about 290,000 to 590,000 young people's jobs, and about 400,000 to 800,000 jobs overall. Therefore, having a minimum wage increase, which is the same as establishing a living wage, decreases employment and in general puts young Californians out of work.

Establishing a living wage is the equivalent of increasing the minimum wage. Therefore, it is reasonable for us to bring up statistics and evidence proving why an increase in the minimum wage is negative.

1. Establishing the living wage has been proven to cause job loss.
Warrant:

The living wage poses a big threat to cities’ economic health, because the costs and restrictions it imposes on the private sector will destroy jobs—especially low-wage jobs—and send businesses fleeing to other locales. Worse still, the living-wage movement’s agenda doesn’t end with forcing private employers to increase wages. It includes opposing privatization schemes, strong-arming companies into unionizing, and other economic policies equally harmful to urban health.

In the 1990s in Baltimore, living wage was established, and as a result,  Baltimore saw its economy crash and burn with 58,000 jobs disappearing, even as the rest of Maryland added 120,000 jobs and other cities across the country prospered. The living-wage bill was just one expression of a fiercely anti-business climate that helped precipitate Baltimore’s economic collapse.
Earlier this year, economist David Neumark of the University of California, Irvine, wrote on these pages that the 70-cent-an-hour increase in the minimum wage would cost some 300,000 jobs. Sure enough, the mandated increase to $7.25 took effect in July, and right on cue the August and September jobless numbers confirm the rapid disappearance of jobs for teenagers.

The September teen unemployment rate hit 25.9%, the highest rate since World War II and up from 23.8% in July. Some 330,000 teen jobs have vanished in two months. Hardest hit of all: black male teens, whose unemployment rate shot up to a catastrophic 50.4%. It was merely a terrible 39.2% in July. The biggest explanation is of course the bad economy. But it's precisely when the economy is down and businesses are slashing costs that raising the minimum wage is so destructive to job creation. Congress began raising the minimum wage from $5.15 an hour in July 2007, and there are now 691,000 fewer teens working.

In a study by Dr. Yelowitz “Santa Fe’s Wage Ordinance and the Labor Market,” dated September 23, 2005 (published by the Employment Policies Institute) Yelowitz demonstrates that the Santa Fe living wage is responsible for significant, negative consequences for Santa Fe’s least educated residents, including a 9.0 percentage point increase in the city’s unemployment rate among such workers.

A study done by the Economic Development Corporation predicted that at least 33,000 prospective jobs would be destroyed by establishing a living wage over the next 20 years. In addition, the study found that $7 billion in private investment would be lost.

A 1999 Tolley report said that over 1,300 jobs will be lost in Chicago from the city's establishment of a living wage. The Employment Policies Institute (1999) estimates that if all of California adopted a living wage, there would be over 600,000 lost jobs and $8.3 billion in lost income.

A comprehensive survey of minimum wage studies found that a 10 percent increase in the minimum wage would reduce employment of young workers by 1 percent to 2 percent.

2. Establishing the living wage, or increasing the minimum wage, has been proven to encourage teenagers to drop out.
Warrant:

David Neumark, professor of economics at Michigan State University, and William Wascher, a researcher with the Federal Reserve, found that minimum wage hikes decrease the proportion of teenagers enrolled in school. In states which allow students to drop out of school before they are 18, a 10 percent increase in the minimum wage caused teenage school enrollment to drop by two percent. In states which require students to stay in school until they are 18, raising the minimum wage had no effect. In sum, when students have the option, higher minimum wages motivate some to leave school and start working.

Another recent paper confirms this conclusion. Duncan Chaplin of the Urban Institute, Mark Turner of John Hopkins University, and Andreas Pape of Michigan State University examined teenagers' continuation ratios-the proportion of a school's students in any year who either graduate or progress to the next grade level. They found that higher minimum wages decreased continuation ratios and led teenagers to drop out of school. Again, this result was present only in states where teenagers could drop out of school at younger ages.

3. The minimum wage is linked to crime in forms such as marijuana selling and gangs.
Warrant:

From an economic, utilitarian perspective, unemployment creates a motive to participate in crime because crime is an alternative way of satisfying one’s economic needs. Second, unemployed individuals, must endure the psychological strain of not being able to achieve their financial aspirations. For reasons that need not be economically “rational,” such strains can also lead to criminal delinquency.

Masanori Hashimoto analyzes national-level time-series teen arrest data derived from the FBI’s Uniform Crime Reports from 1947 to 1982. He found that changes in the minimum wage over the period are positively associated with teen arrests for property crime as a fraction of total arrests. In 2002, Chressanthis and Grimes also used national-level Uniform Crime Reports data. Their research included unique controls such as school enrollment rates and capital punishment rulings by the Supreme Court. They conclude that the minimum wage positively affects the incidence of murder, rape, and motor vehicle theft among teenagers. This is sourced from the report, “Youth Crime and the Minimum Wage,” by Andrew J. Kallem.

“Youth Crime and the Minimum Wage” by Andrew J. Kallem